Updating a Hollywood classic is a risky game. Remember the brouhaha triggered by colorizing Casablanca? It’s arguably the best movie ever made, but (unless you’re nostalgic) Humphrey Bogart and Ingrid Bergman’s black-and-white love story is a dinosaur in today’s kaleidoscopic world. Even a masterpiece deserves a fresh coat of paint and a new audience. 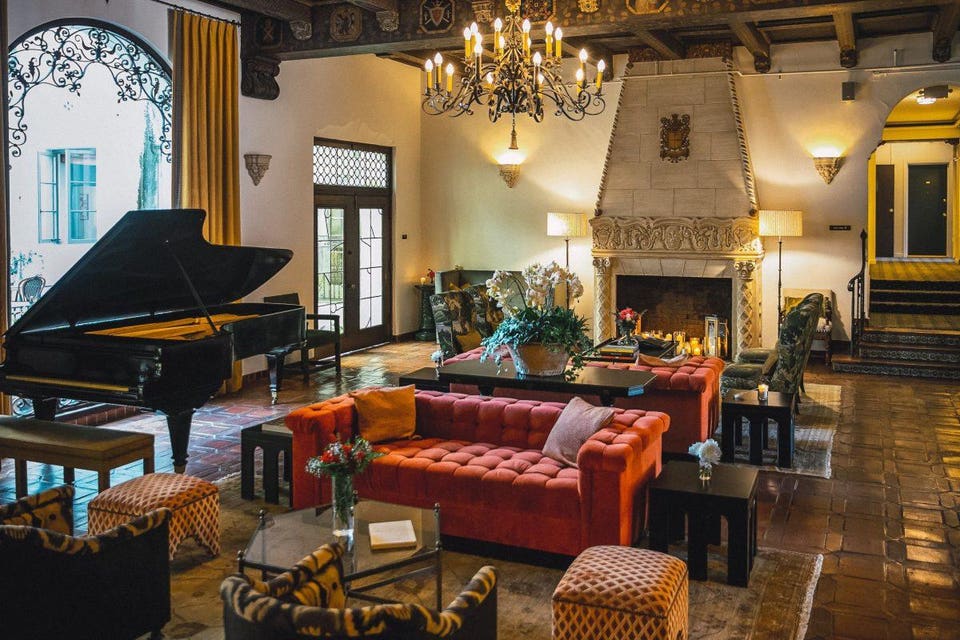 This law also applies to Hollywood’s classic Villa Carlotta, the 1920s architectural landmark in the quaint Franklin Village neighborhood, which executed a tasteful $5.5 million restoration for modern-day gypsies seeking residential hotel living laced with history, charm and contemporary finishes. To that, Bogart, who once lived across the street, might even say, “Here’s looking at you…” 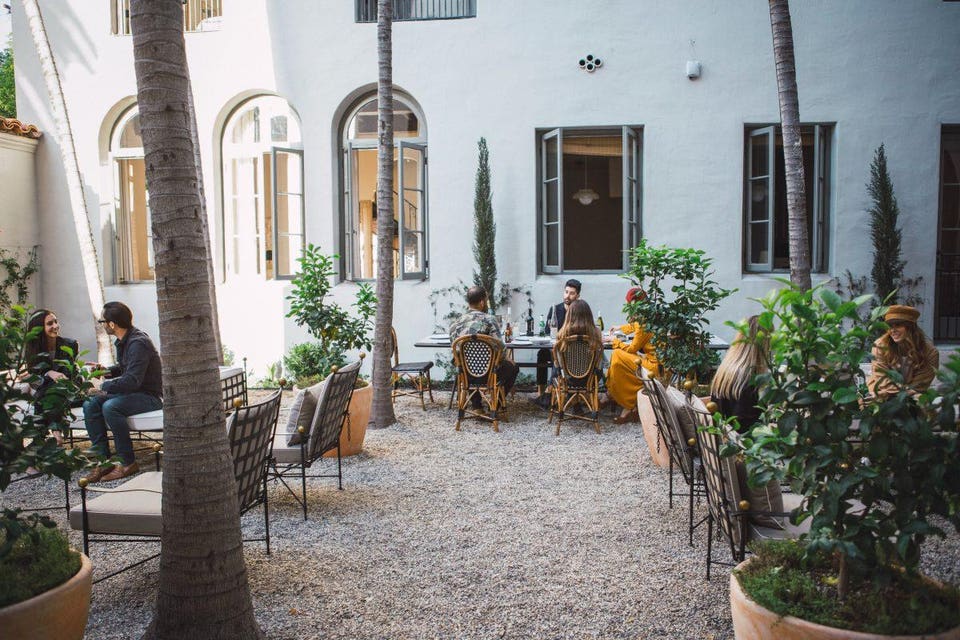 Traditional rules say play it safe with classics. Modern rules require a fresh approach, a calculated risk, even going all in. Anything in between would be boring. And Villa Carlotta is far from boring. It has tiptoed on the edges of opulence and seediness for decades. But boring? Never. 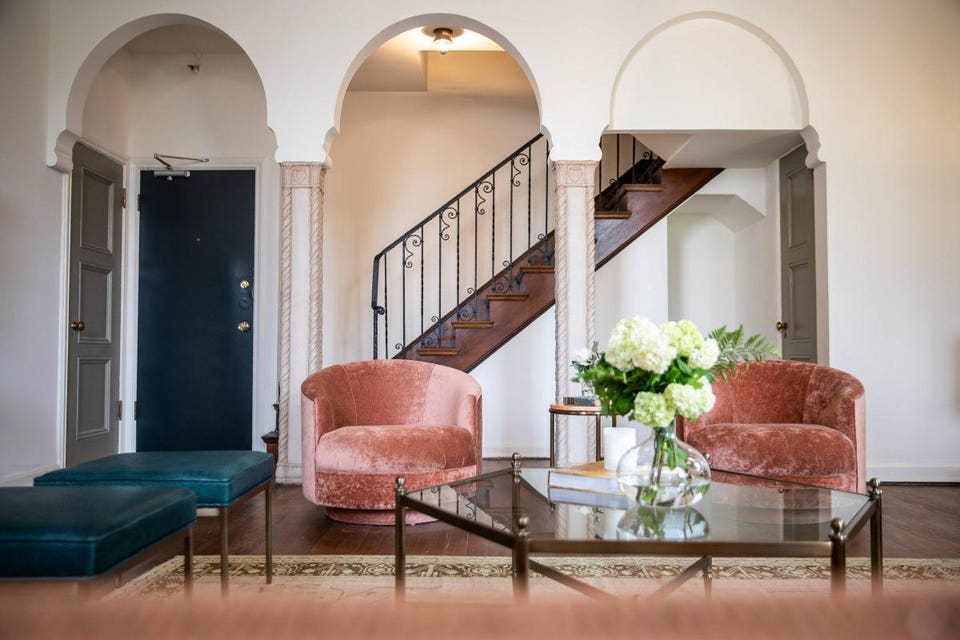 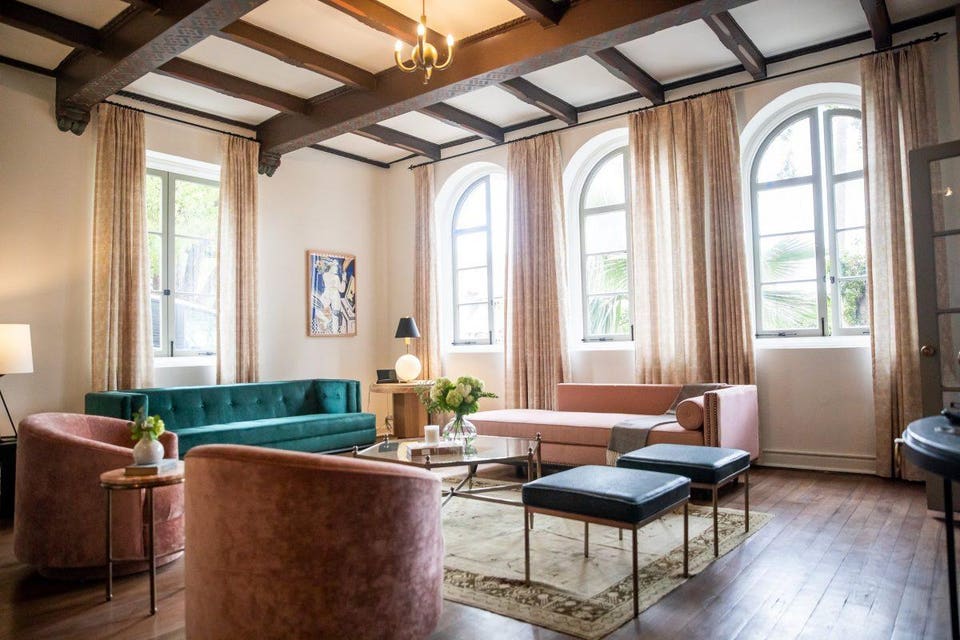 Villa Carlotta is vintage, authentic and evidently a great source of inspiration. The building’s restoration essentially rewrites history, chronicling a modern chapter of its original lavish mission. Half-empty and physically crumbling beneath its scandal-tinged backdrop by the early 2000s, what did it have to lose? 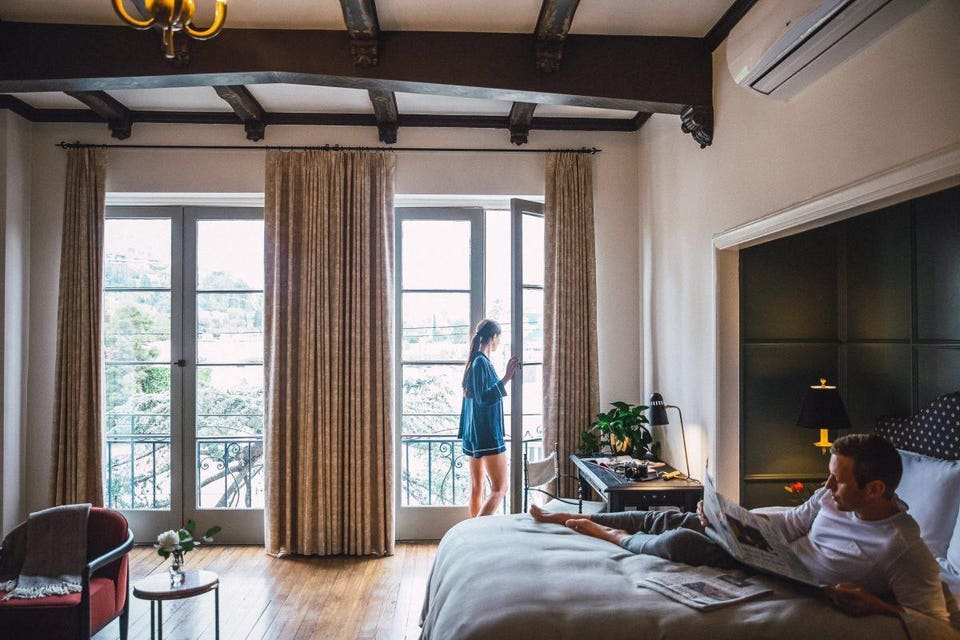 The restored villa is beautified by illuminating floor-to-ceiling French doors and windows.CGI STRATEGIES 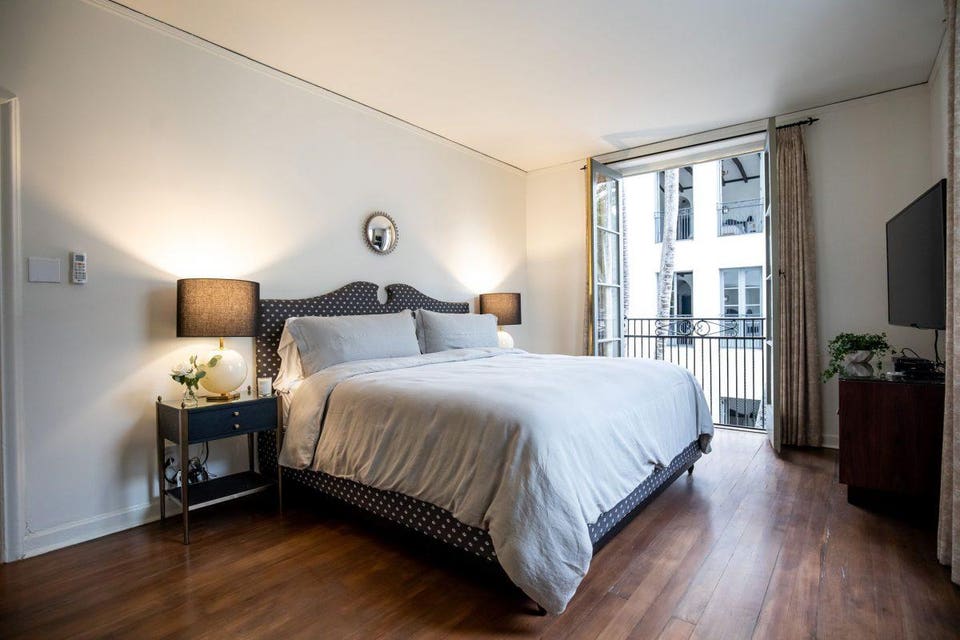 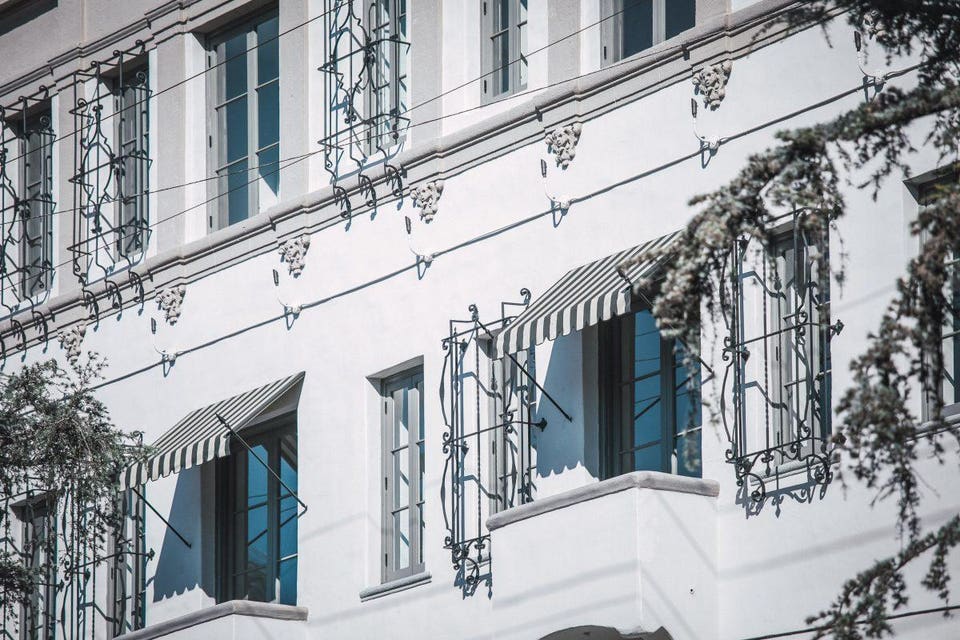 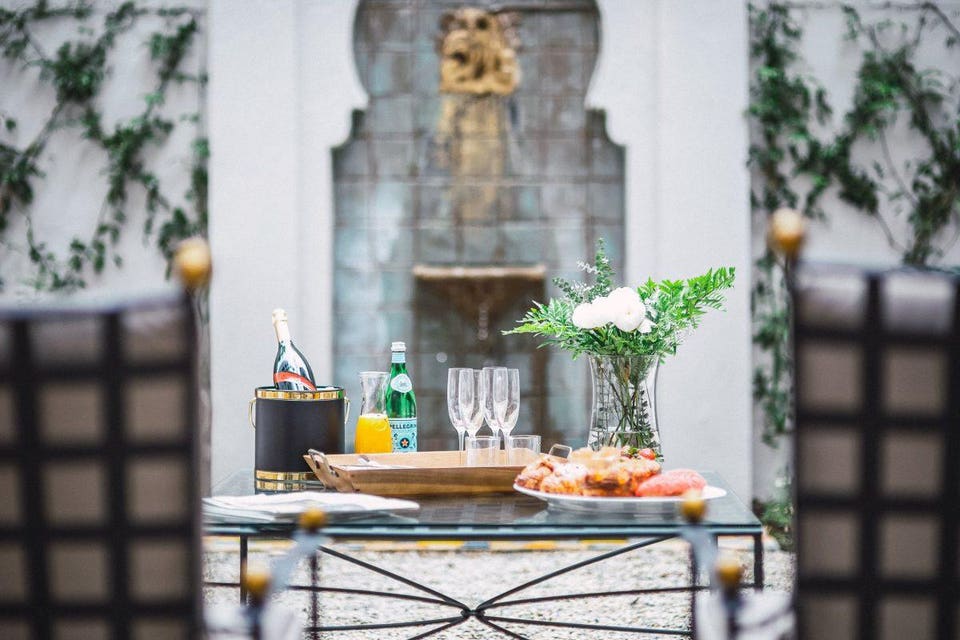 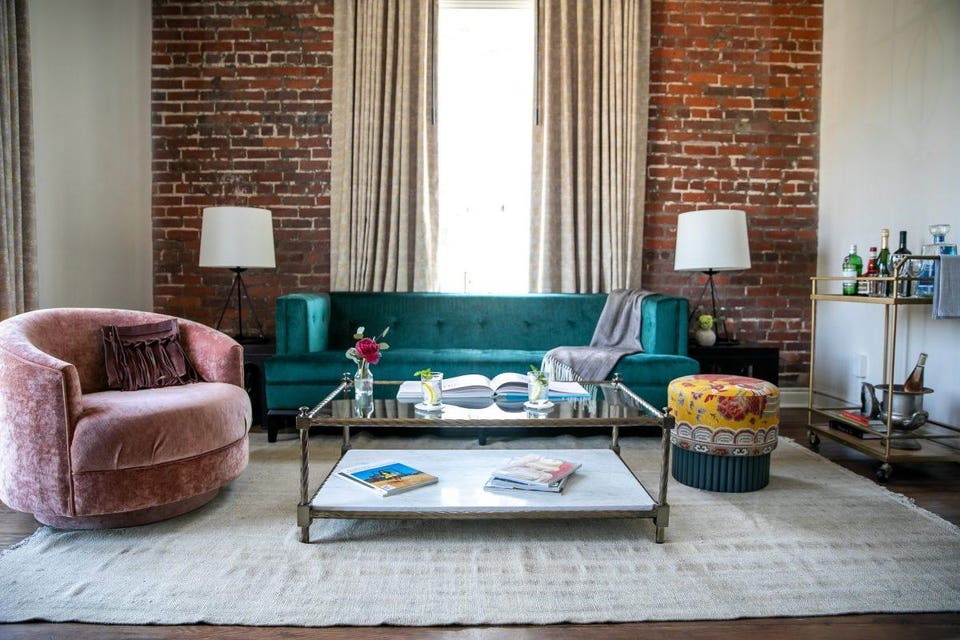 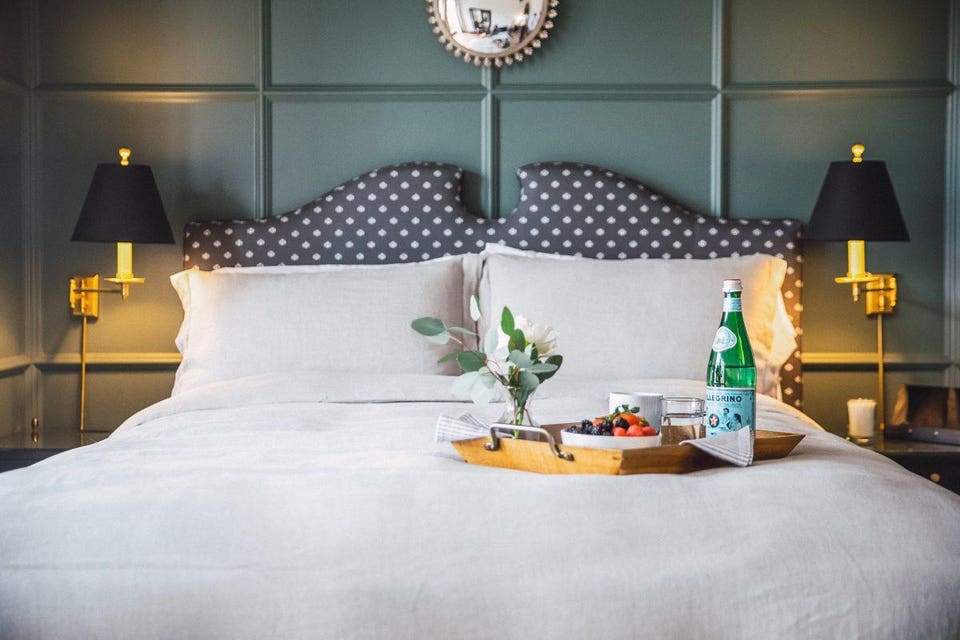 “Great care was taken to maintain the historic integrity of the interior design of the common areas, and unit interiors which were curated by Studio Preveza, under the direction of founder Christos Prevezanos,” says Gidi Cohen, founder and CEO of CGI Strategies. 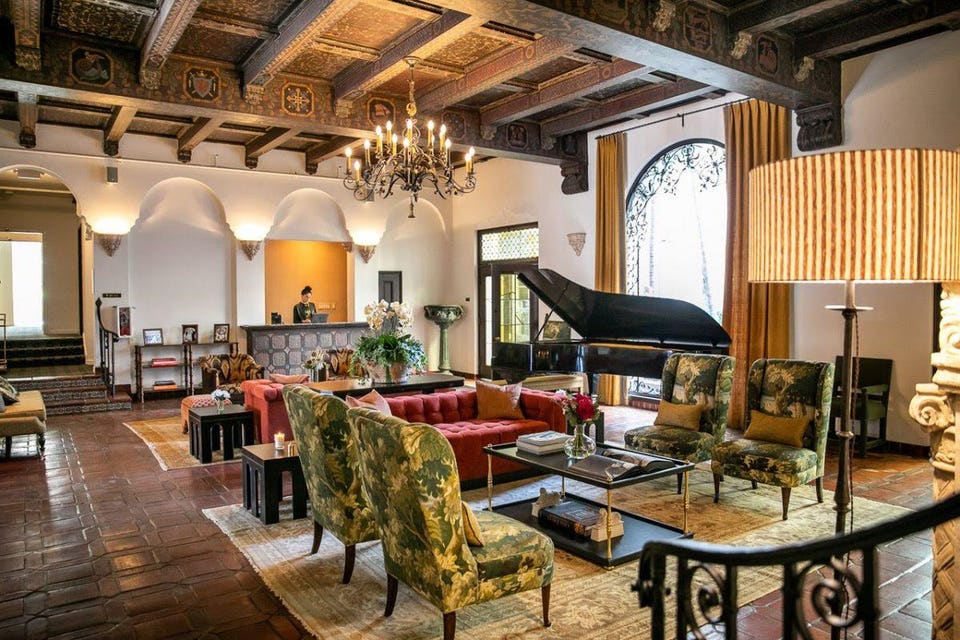 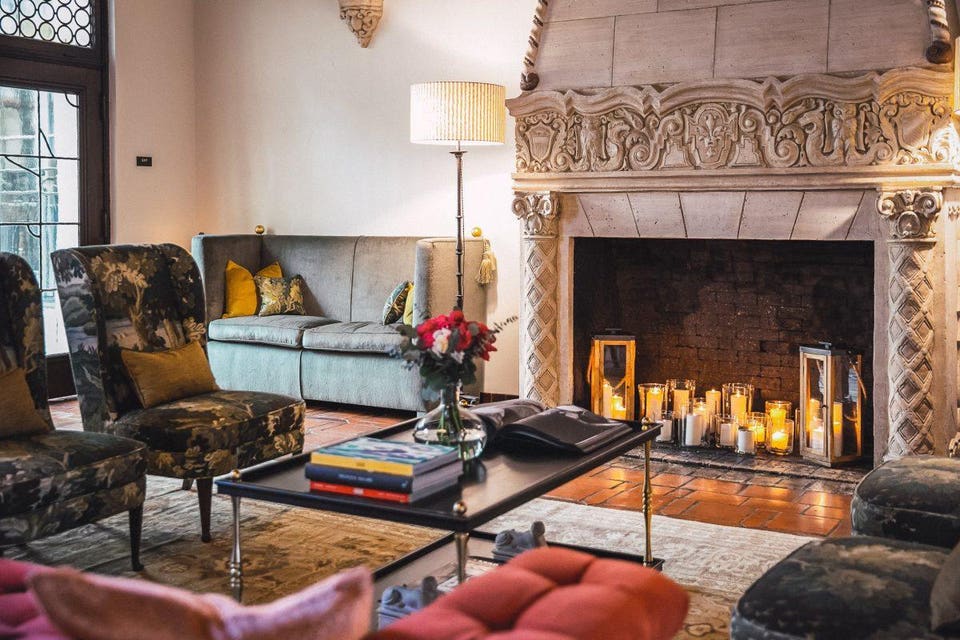 The stucco villa is still highlighted by those common areas—an expansive lobby (with Studio Preveza custom furniture, a grand fireplace, and a $10,000 grand piano gift from former 40-year resident Sam Fuller), and The Palm Garden, a tranquil communal courtyard. Villa Carlotta “residents” can also indulge in southern California sunsets over the iconic Hollywood sign from the rooftop. 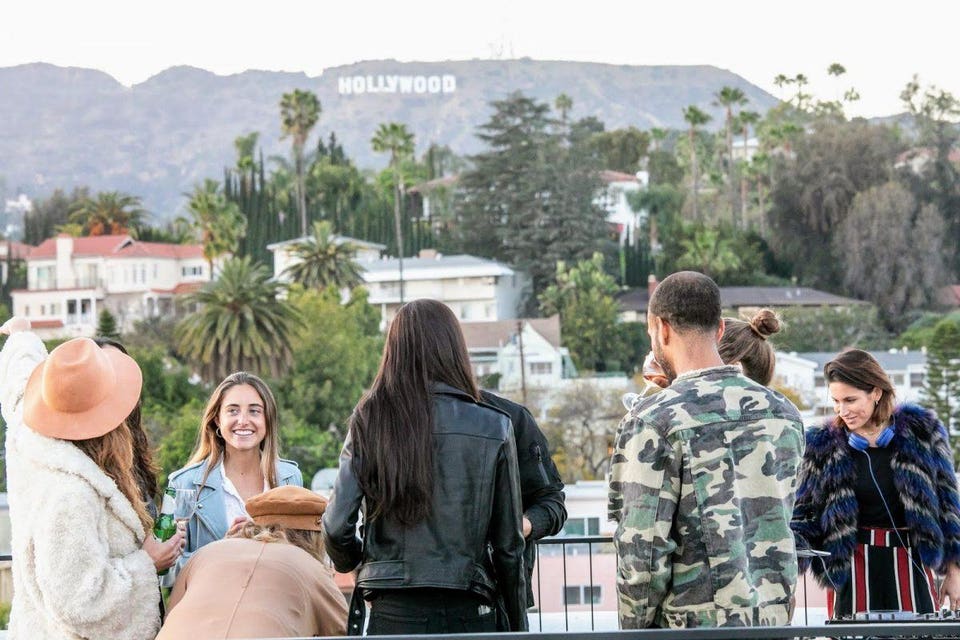 CGI acquired Villa Carlotta in 2014. Despite a 1986 designation as a Los Angeles Historic Cultural Monument, Villa Carlotta fell into disrepair after decades of neglect, including the presence of pests, asbestos, mold and interior unit damage. The landmark was overdue for a physical and reputational cleanup. 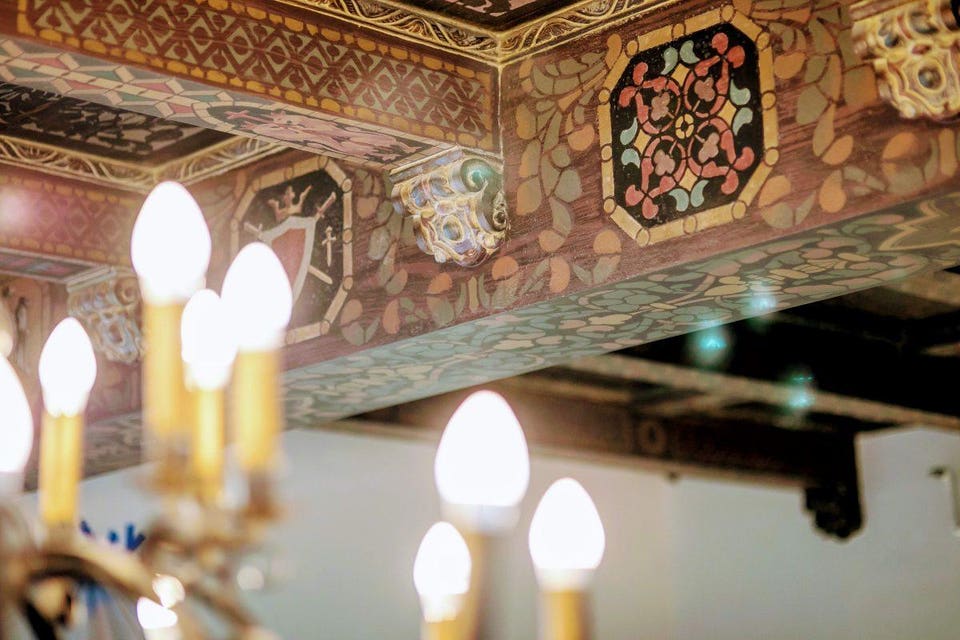 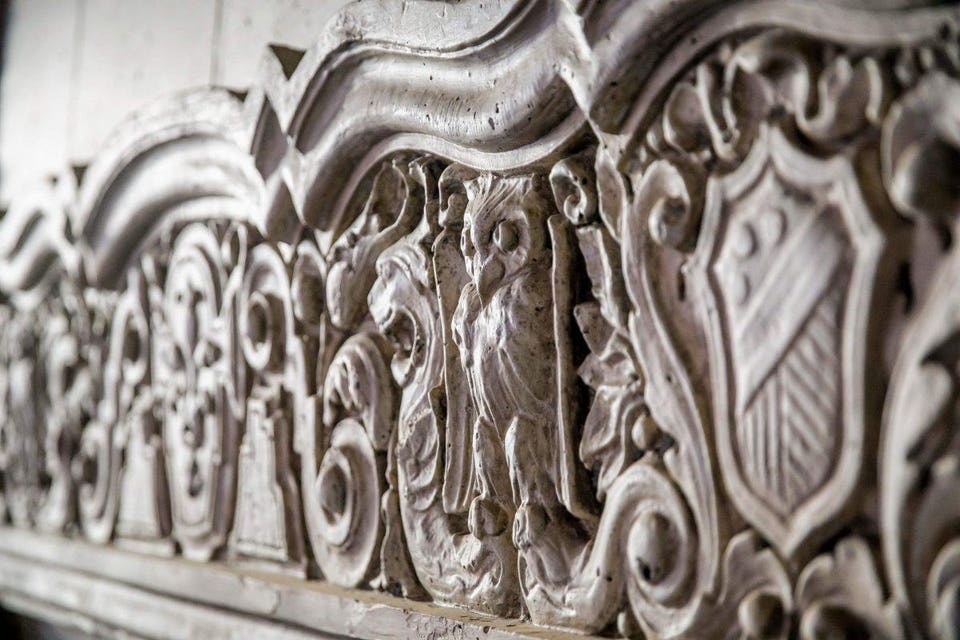 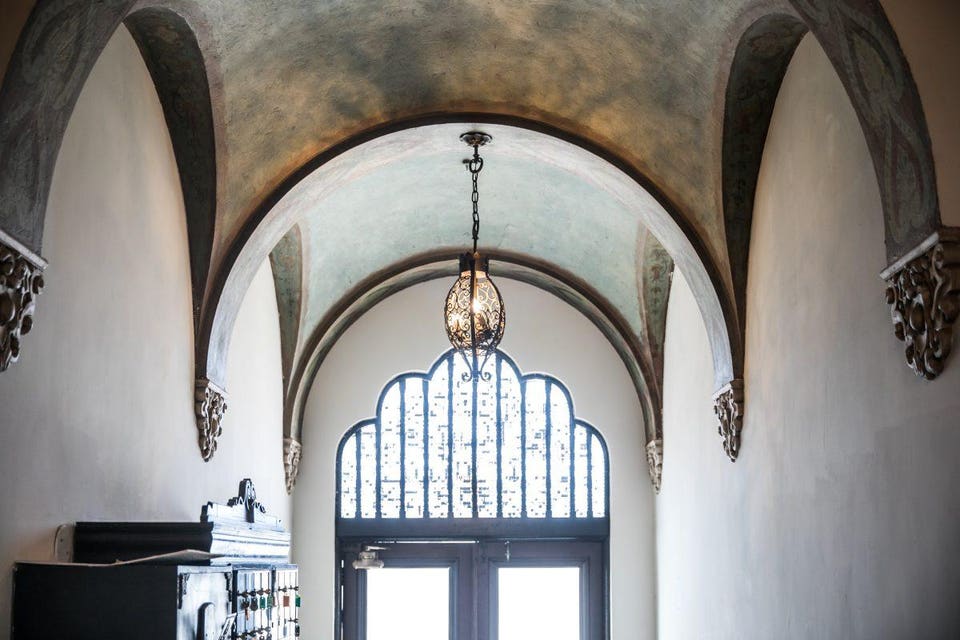 “Those with an appreciation for architecture will fall in love with the property’s elegant, Hollywood charm of yesteryear, and also appreciate the 21st century conveniences that are offered,” says Billy Rose, co-founder and president of Beverly-Hills based brokerage The Agency, which is listing the entire inventory of Villa Carlotta’s apartments. “From the woodwork to the windows, Villa Carlotta has very vintage, authentic detailing that enchants from the moment of arrival.” 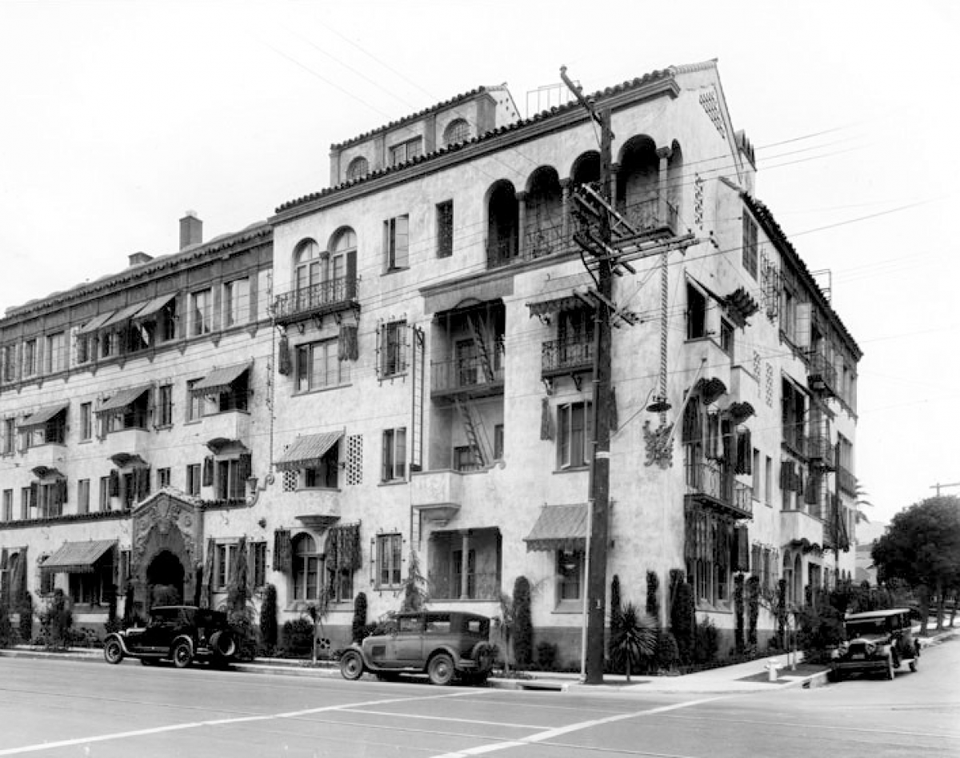 Villa Carlotta’s heritage is virtually ripped from the gossip pages or a scandalous screenplay. But it’s true Hollywood (mostly). The building was originally owned by Elinor Ince, widow of silent film tycoon Thomas Ince, who according to legend, was shot in 1924 aboard newspaper magnate William Randolph Hearst’s USS Oneida yacht, and later died. 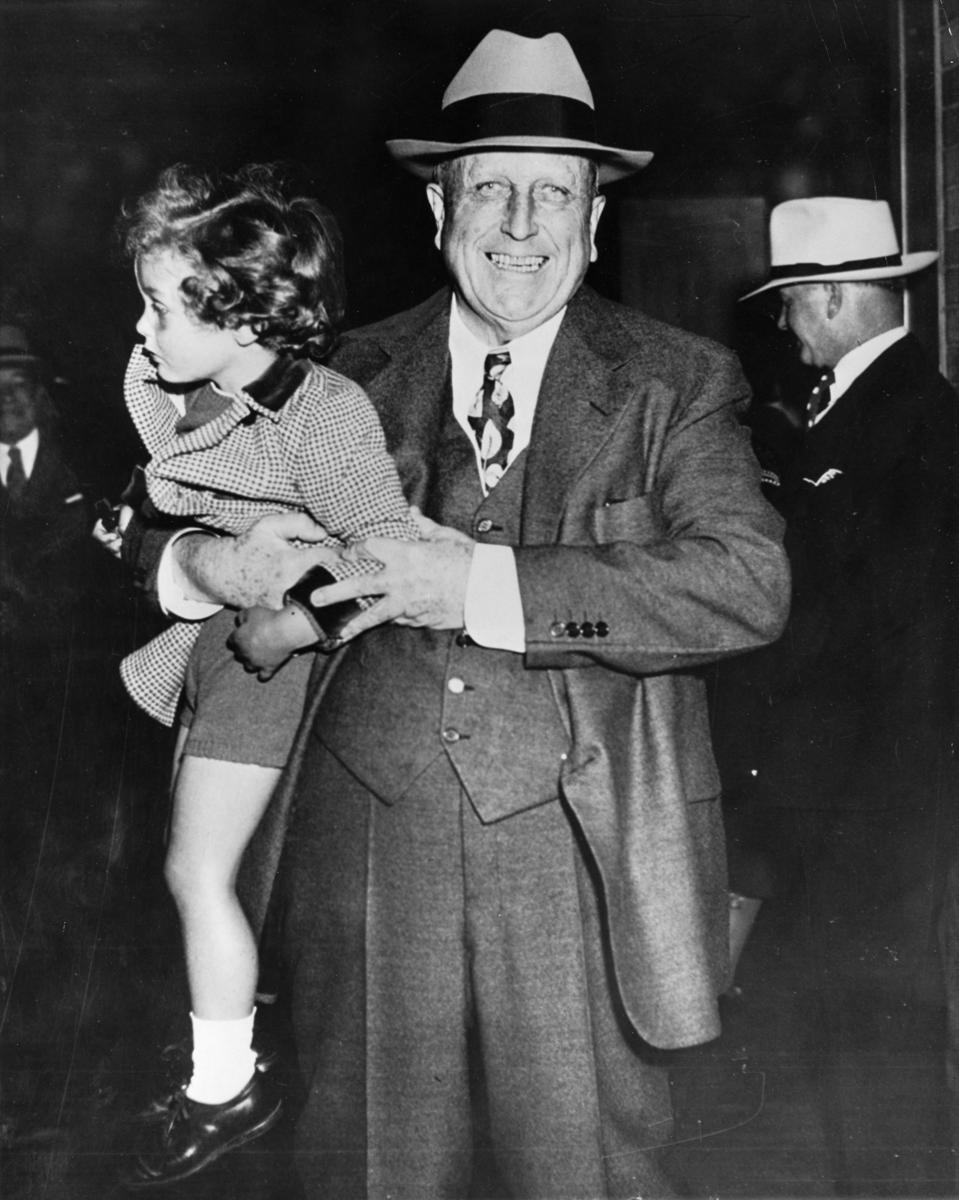 Rumors swirled Hearst himself fired the shot, accidentally striking Ince with a bullet intended for film superstar Charlie Chaplin, whom the publishing mogul suspected of having an affair with his mistress, actress Marion Davies (herself speculated as the inspiration for the untalented muse in the film classic Citizen Kane). Hearst allegedly financed the building’s construction as a “grief payment” to Elinor. 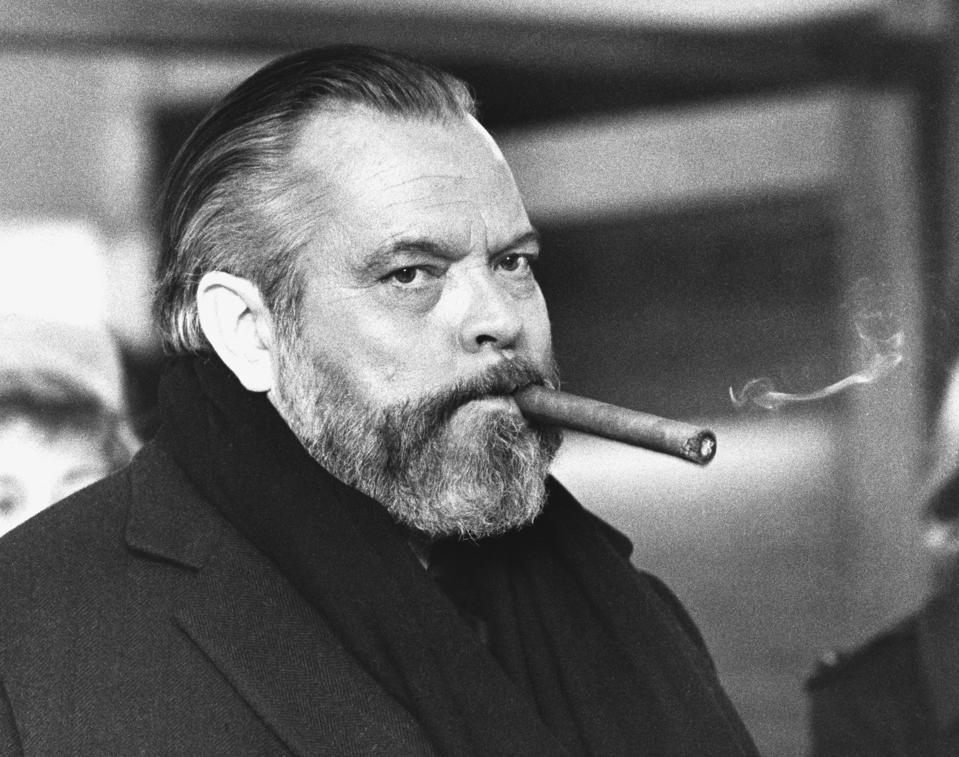 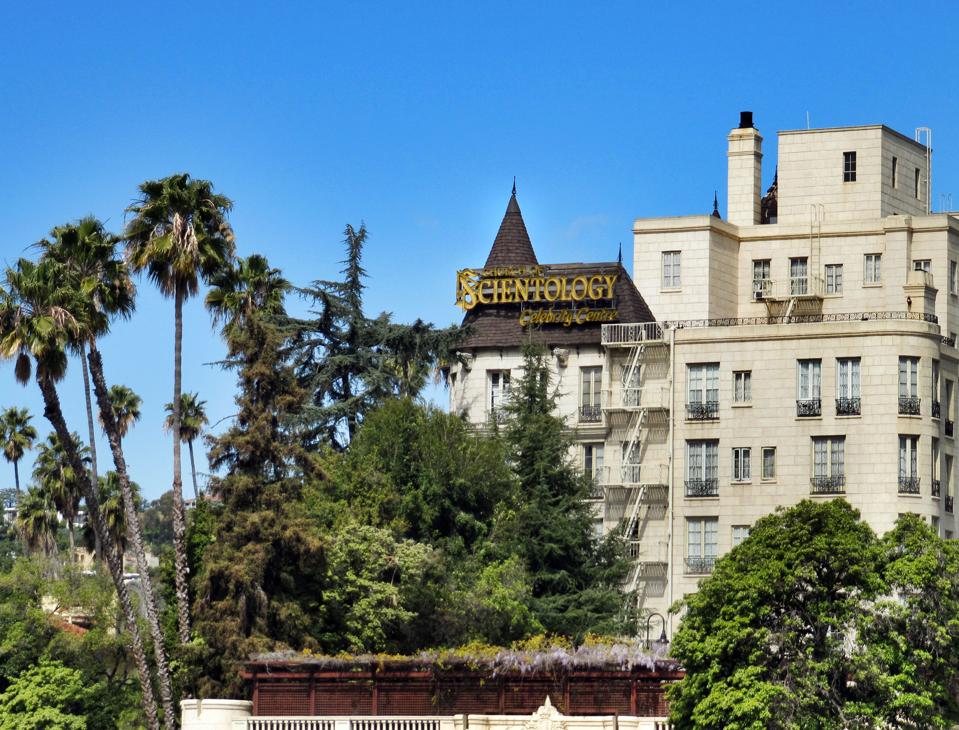 Villa Carlotta has been home to countless famous residents, including Davies, Oscar-winning producer David O. Selznick (Gone With The Wind), Oscar-winning director George Cukor (My Fair Lady), actor Montgomery Clift (A Place In The Sun), and Hollywood gossip columnist Louella Parsons, a Hearst protégé and USS Oneida witness who allegedly received Villa Carlotta’s most luxurious apartment as reward for her silence. Parsons penned her controversial columns from a Villa Carlotta duplex on the courtyard, and she was married in the building’s lobby. 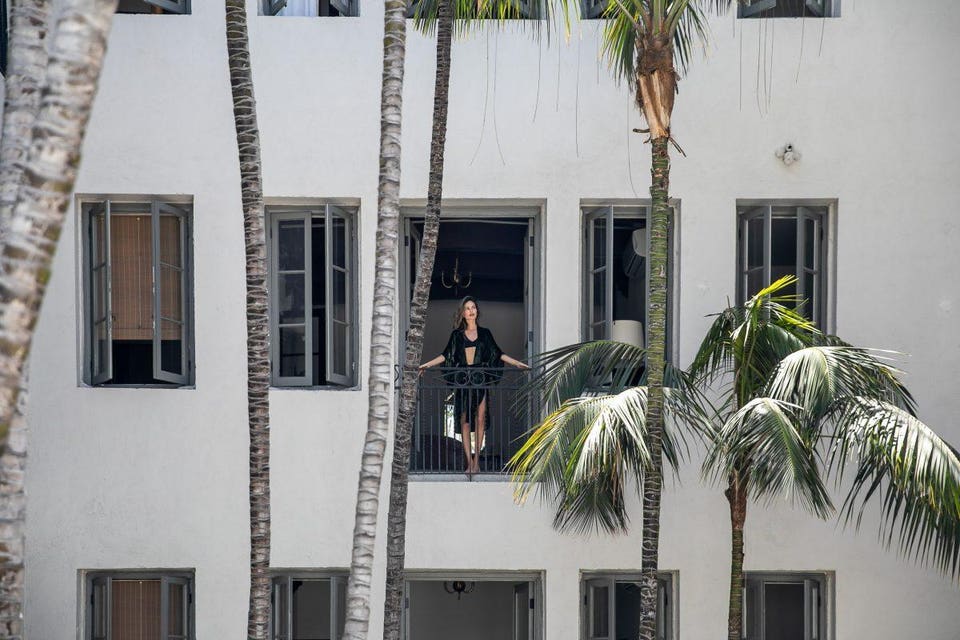 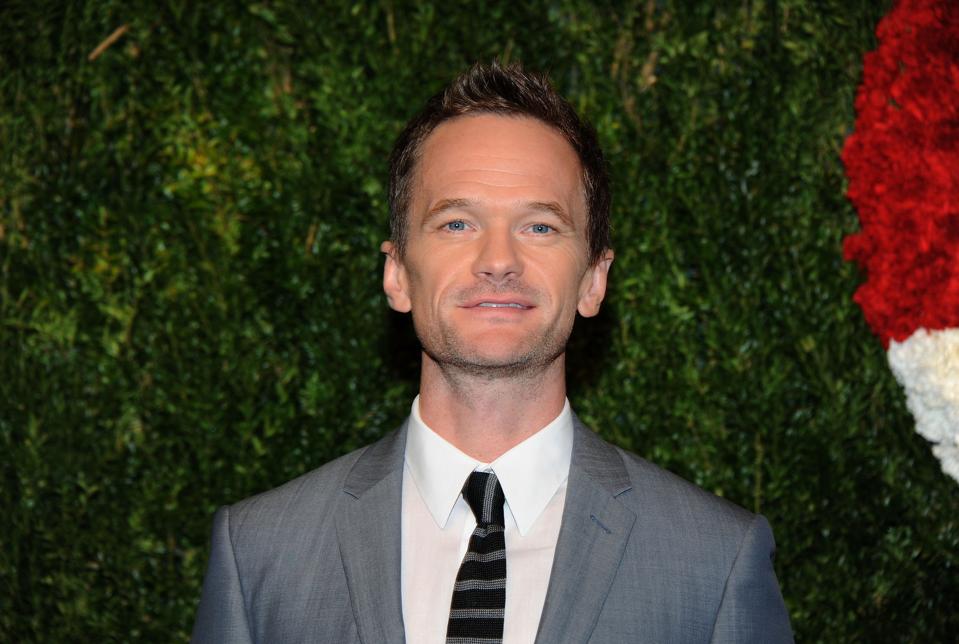 Villa Carlotta is ever the pop culture icon as its residents, chronicled in movies and Frederica Maas’ book called, The Shocking Miss Pilgrim: A Writer in Early Hollywood, where she adoringly effuses about villa’s expense and cachet. The Franklin Village neighborhood adds to Villa Carlotta’s appeal as a rare Los Angeles pedestrian district with retail, dining and proximity to West Hollywood, Beverly Hills, downtown L.A., as well as easy access to to the San Fernando Valley where movie studios and TV networks are located. 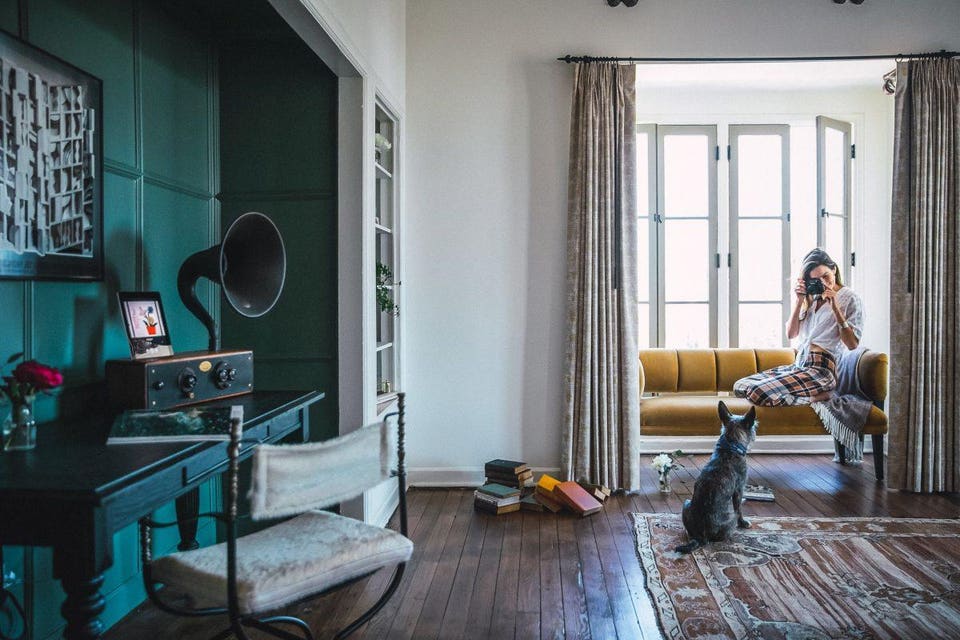 “This property’s restoration was inspired by its history as a home and haunt for the artistically adventurous,” says Rose. “Villa Carlotta is a Hollywood residential hideaway for free spirits drawn to the iconoclastic energy of bohemian Los Angeles. From the collection of lounge spaces like The Palm Garden, the inviting foyer, and the impressive rooftop, Villa Carlotta will attract like-minded souls and develop a great community of shared experiences.” 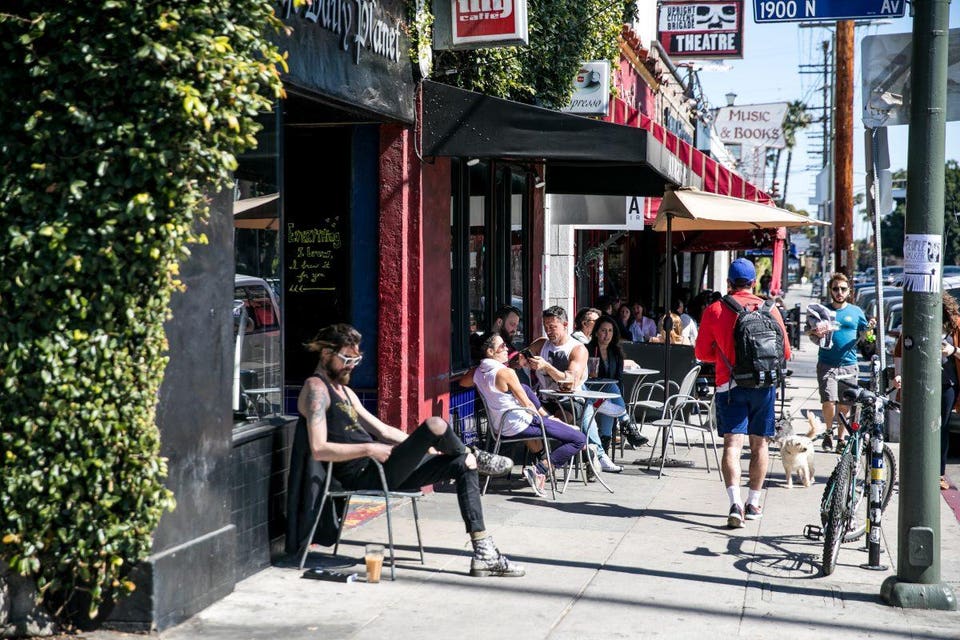 Villa Carlotta could be a called a Bohemian Rhapsody, like Queen’s operatic song where a man accidentally kills someone and asks for God’s forgiveness. But instead, the shooter in this story finances one of Los Angeles’ iconic architectural gems to keep his sin a secret. That is, if you believe Hollywood legends. 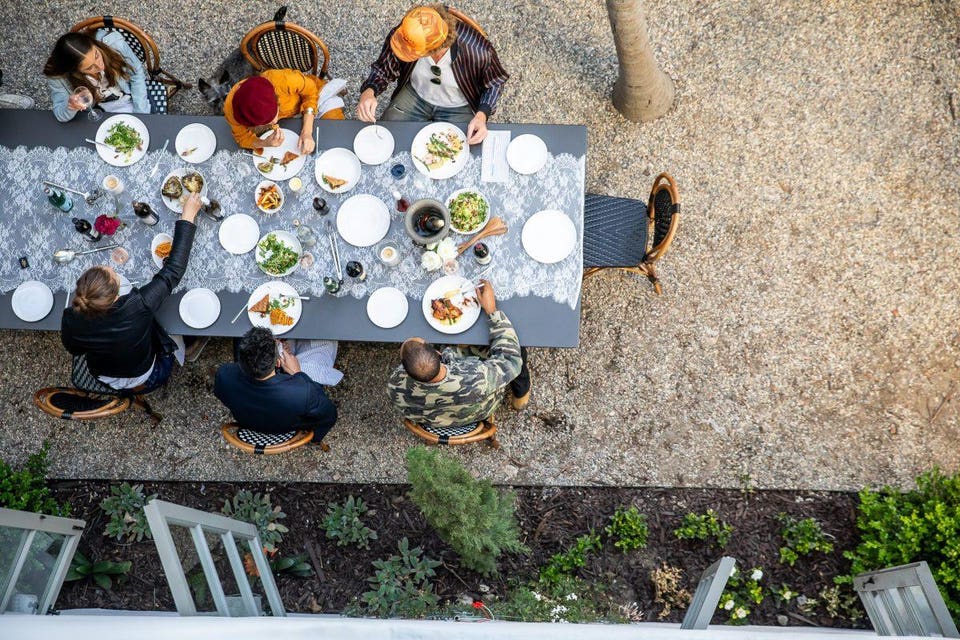 The people who dwell at Villa Carlotta aren’t quite squatters or angels—they’re successful overachievers who live eccentrically in the City of Angels.
original article:
https://www.forbes.com/sites/keithflamer/2018/06/27/hollywoods-landmark-villa-carlotta-reopens-after-5-5-million-makeover/#7583b56e4ddd