The exterior of the Ennis House.MARY NICHOLS

The fully-restored Ennis House in the Los Feliz neighborhood of Los Angeles has come on the market for $23 million after last selling in 2011 for almost $4.5 million. The current owner, Ron Burkle, carried out a $17 million restoration after the home had deteriorated over the years and suffered damage in the 1994 earthquake. Burkle is a mainstay on the Forbes Billionaires list as founder of the investment firm Yucaipa that has seen its fortunes rise in the buying and selling of supermarket chains and other companies that support the nation’s food supply. He is currently ranked at #1215 but has climbed all the way into the list of the country’s Wealthiest 400 as recently as 2014.

The home has all the signature design motifs that would appeal to any Frank Lloyd Wright fan—as well as a few Tetris enthusiasts. Fans of the film Blade Runner might also recognize the exterior as one of the buildings used in the movie.

I’ve drilled in to some of the very specific design details in the pictures below but for more of the macro design view take a look through this gallery.

Each of the intricate blocks used to build the exterior were built onsite during construction from decomposed granite excavated from the building lot. In this home’s design the small represents the whole, with the overall design of the three-bed, four-bath house consisting of semi-separate wings each in their own “block.” But it is the inside where the typical Wright features really come to life.

The dining room is a classic design by this famed architect with furniture built in so it appears to be part of the home. The oversized windows with prairie style motifs are a part of many of Wright’s designs. 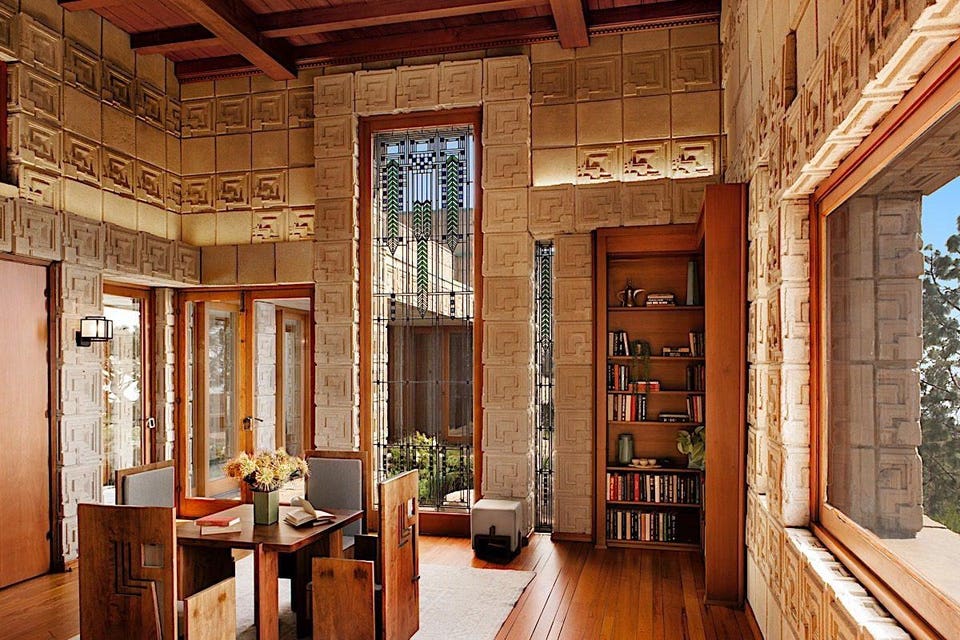 Take a closer look at the windows and how the pattern in the glass balances the spiral texture of the granite blocks. 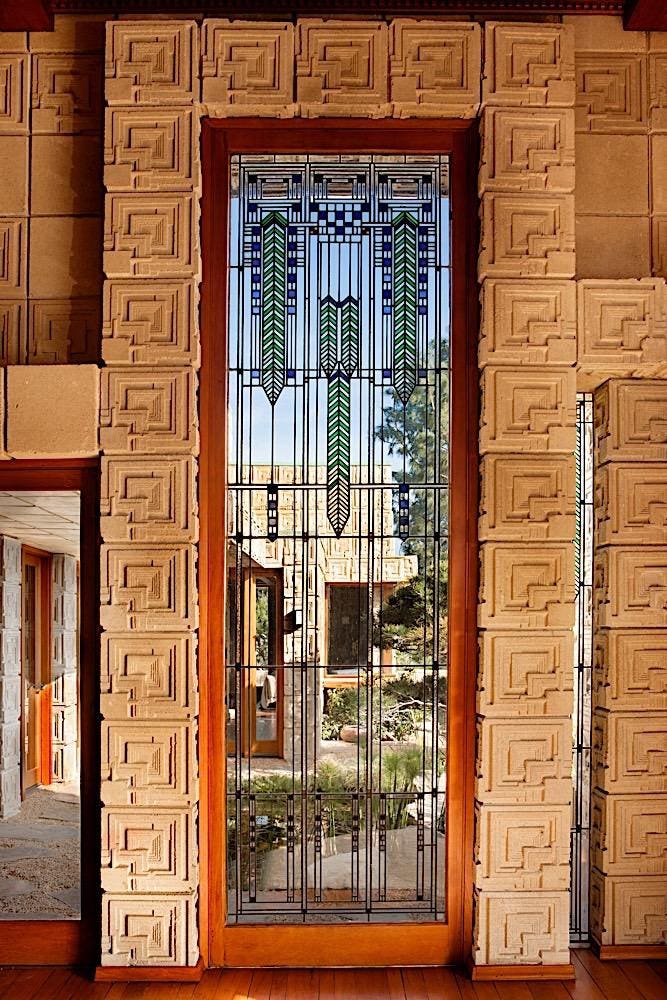 A close up of the prairie style windows.MARY NICHOLS

Another dining room designed to host a large group of people takes the same principles of the smaller dining room and scales them up to fit the proportions of the room. The high-backed chairs are one of the ways Wright created “rooms within a room” so that people sitting around the table would feel like they were in a smaller, more intimate space. Luckily this house is offered with the furniture so a new owner doesn’t have to try to recreate the same result from scratch. 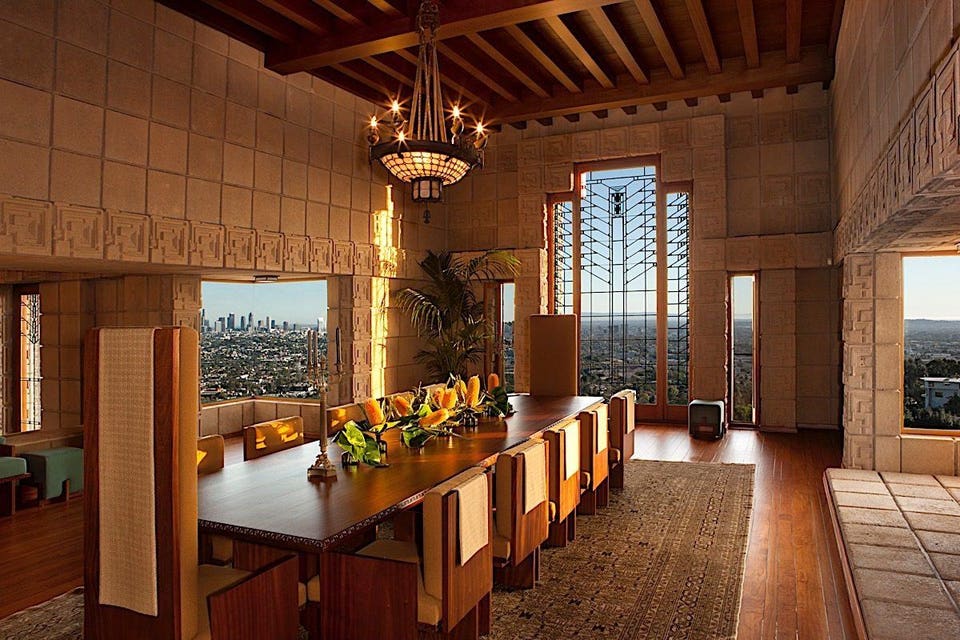 The elongated dining room that overlooks the city of Los Angeles.MARY NICHOLS

The more casual games room has a lower ceiling to create a cozier vibe and has an open fire pit in the corner. 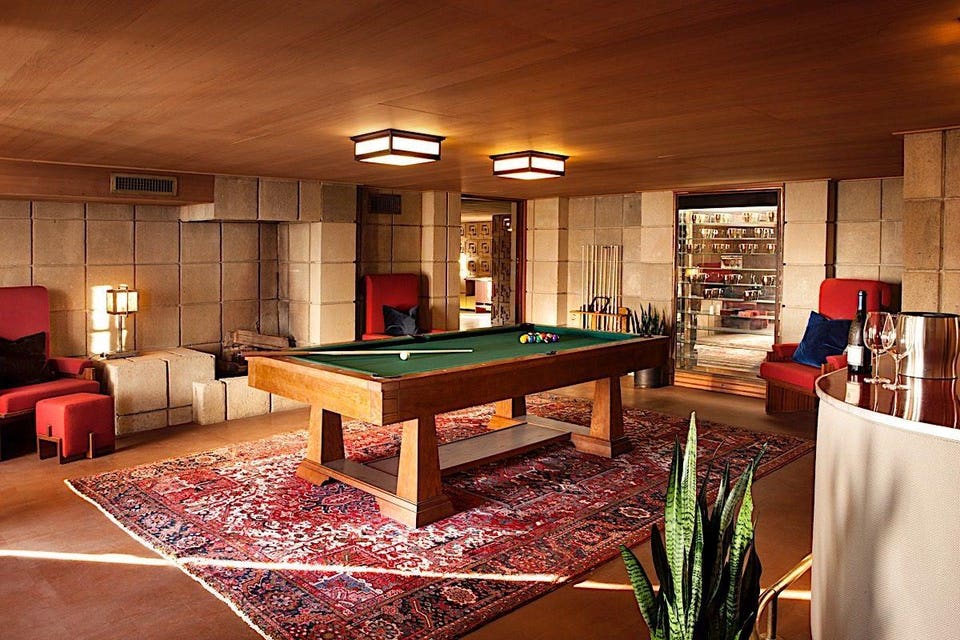 A games room has an open fire pit in the corner.MARY NICHOLS

The textile blocks were used for most of the grand double-height living room, but herringbone tile comes in to play in the recessed part of the wall to distinguish the space from the rest of the room. It provides a subtle way to put a frame around the artwork. 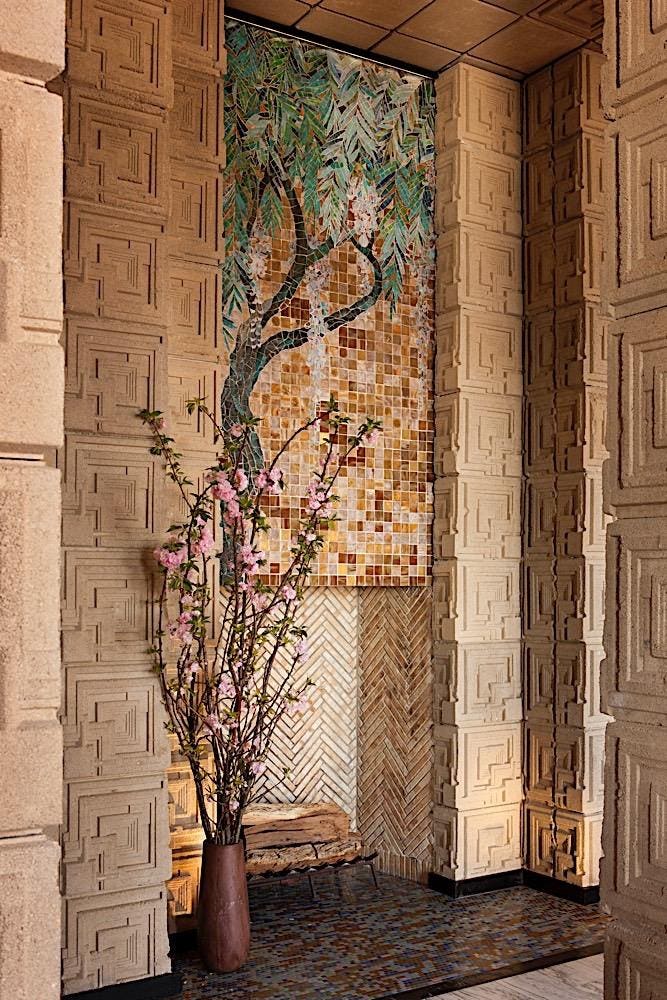 Herringbone detail on the recessed part of the wall creates a backdrop for artwork.MARY NICHOLS

Nestled in the hills of Los Feliz, this is not the most expensive home for sale in the neighborhood. A $26 million property is for sale on the same street and nearly every other home for sale in Los Feliz is asking over a million. Only the condos are in the six figures.